Solvay was at the forefront of the first industrial globalization that took place at the end of the 19th century. Thanks to its strong and precocious international network, the company contributed to the industrial development of the many countries in which it had settled –directly or through partnerships. A global leader in its field, Solvay was also recognized for its extensive welfare programs and support to academic science.

Taking good care of its employees

Supplemental health and protection initiatives formed a key part of Solvay’s social policy. Since 1878, medical centers and hospitals built near the plants provided free services to workers and their families for general medical needs, surgery, home nursing, maternity, dentistry, and so on. Solvay also covered the medication costs of qualified workers and paid half their salary during lost time due to sickness. Accident victims received reimbursement for damages. The first pension fund was created in 1879–1880. Ernest Solvay called science his “fifth child”. Though pleurisy kept him out of university, after amassing fortune, Ernest devoted time and money to endow scientific learning. Several institutes he founded are depicted here from left to right: Physiology (1895), Business School (1903) and Sociology (1902), all part of a “Cité Scientifique” set up in Brussels at Parc Léopold, nearby today’s EU institutions. 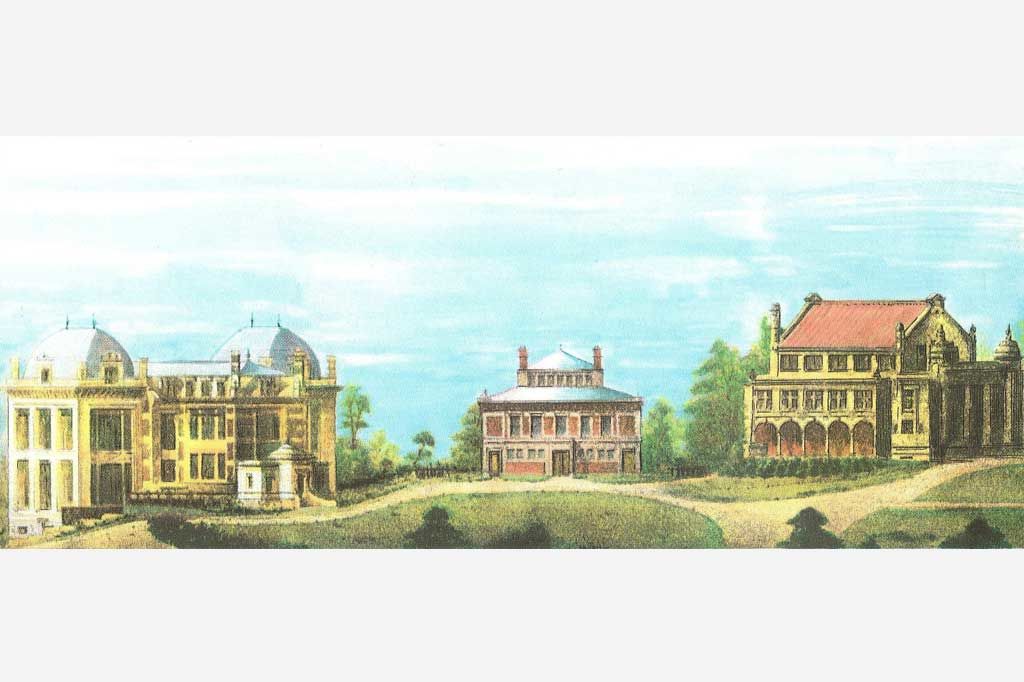 A passion for physics

Ernest Solvay cherished physics most. He funded in Brussels a series of Councils bringing together the era’s most brilliant physicists. The first one, held in 1911, gathered Einstein, Curie, Langevin, Nernst, Planck, Brillouin, Lorentz, Rutherford, Poincaré and others. A similar Council of Chemistry was held in 1922, and institutes have since been created to organize such meetings on a regular basis, until even today. 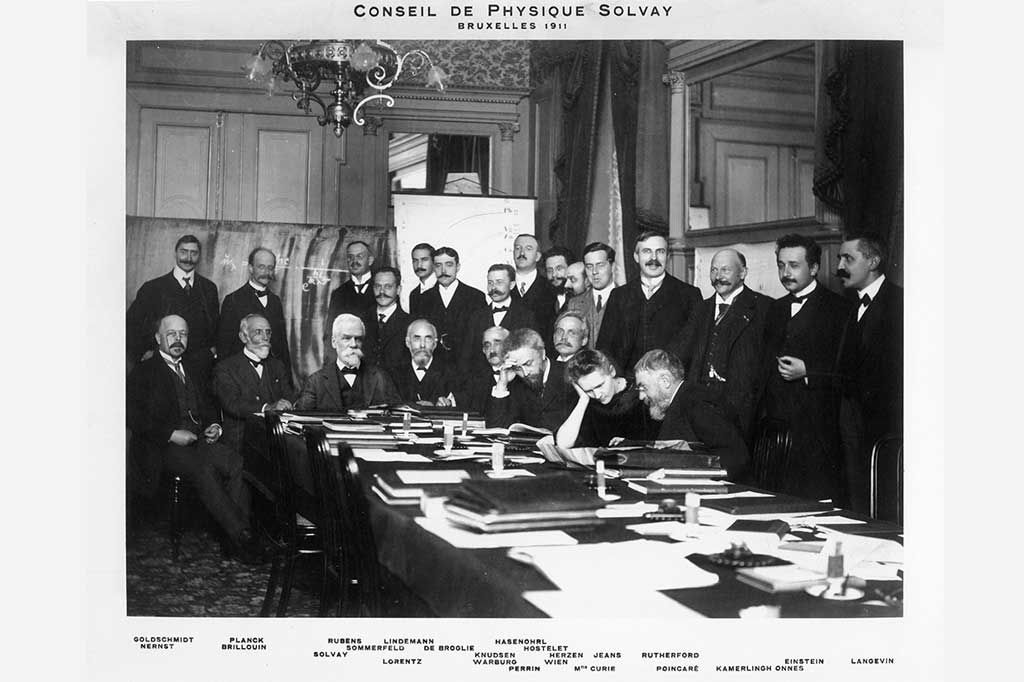 Focus on science and education

Solvay’s philanthropy has always been focused primarily on science and education. For its 50th anniversary in 1913, the Group made large gifts to universities in Europe, the US and the Congo and founded an institute for workers’ education in Brussels. In its industrial sites worldwide, Solvay arranged and subsidized day care, primary schools (here at Turda, Romania), and summer camps for children. Solvay also granted scholarships to its most gifted workers. The Soda Ash and Electrolysis trees

Solvay frequently displayed this “soda ash tree” at industrial exhibitions. In the image, raw materials are depicted in the soil, while the trunk highlights the company’s main products, and the branches represent sub-products and derivatives. The many leaves show the multiple uses of soda ash. After 1900, a second tree grew alongside the main one, announcing the coming of electrolysis for producing caustic soda and chlorine in equal quantities. 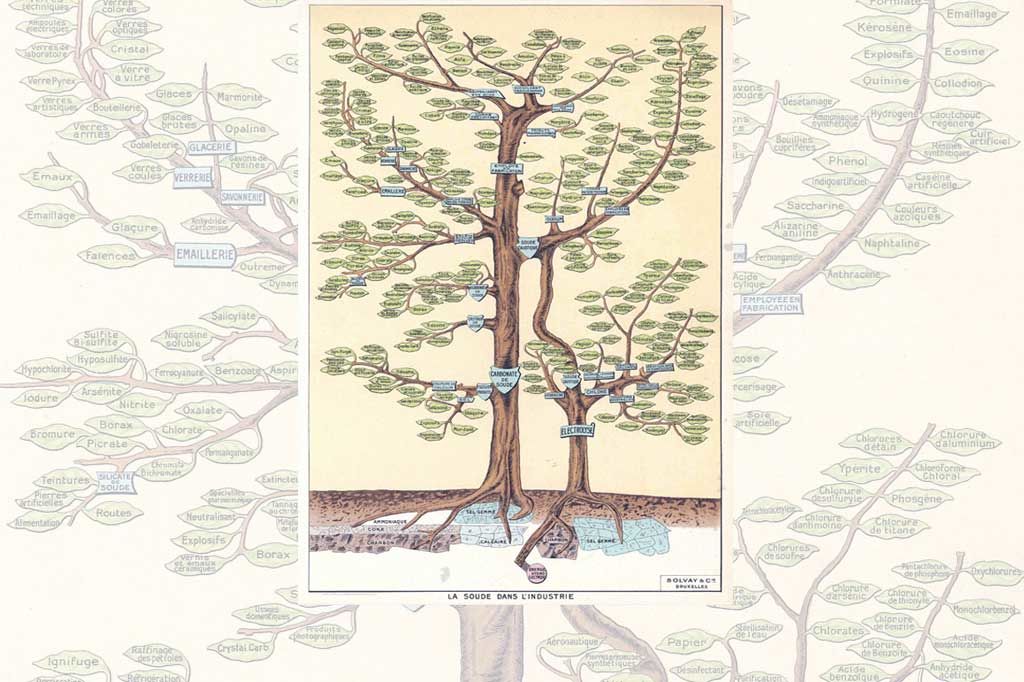 At the turn of the twentieth century, Solvay was a single-product company leading a fast-growing industry. With its associated companies in Great-Britain (Brunner, Mond & Co), Germany (Deutsche Solvay Werke), Austria-Hungary (Oesterreichischer Verein), the US (Solvay Process Co) and Russia (Lubimoff Solvay & Cie), the Group owned 32 plants, employed 25,000 people and produced nearly two million tons of alkalis. As such, it was the most international and largest chemical group in the world in terms of workforce and output. 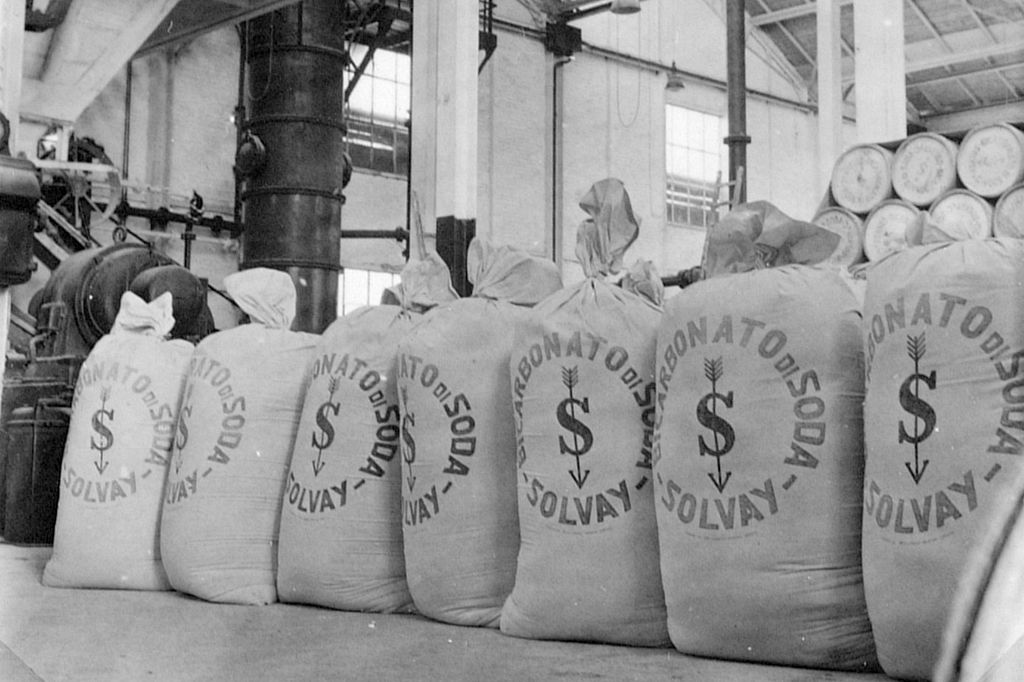 As long as Solvay remained a partnership company (until 1967), management was almost exclusively composed by Solvay family members, with the notable exception of Prosper Hanrez (1880-1886) and Edouard Hannon (1907-1922), both technical directors who’d earned the right to join the management team due to their merits.  Pictured here (from left to right): Louis Solvay, Edgard Hulin, Armand Solvay, Ernest Solvay, Georges Querton and Edouard Hannon. 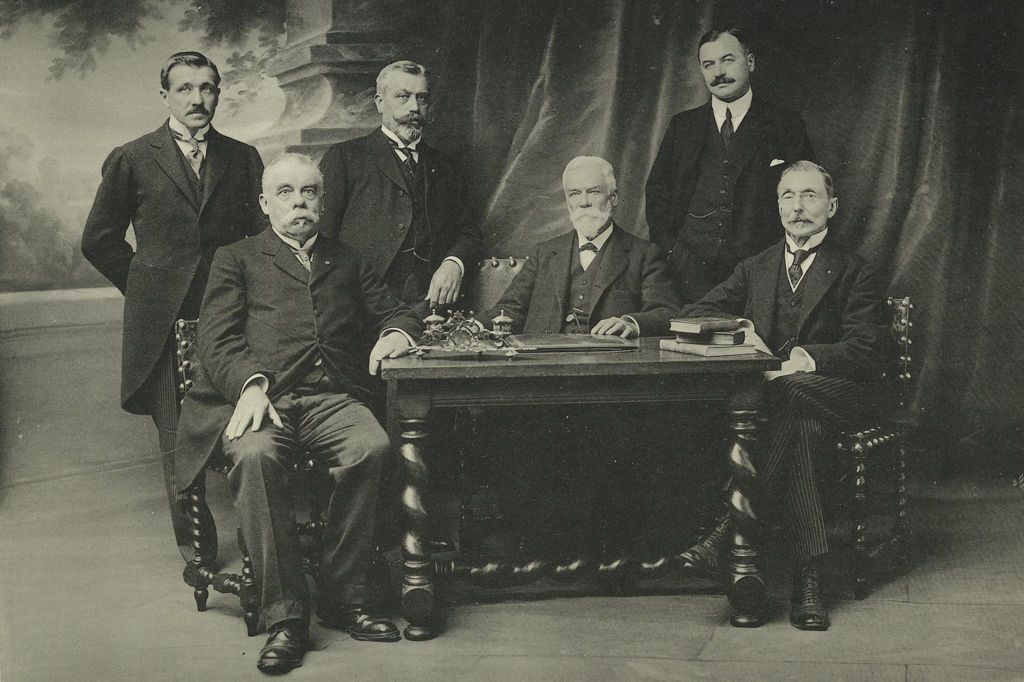 Meanwhile, in the Rhone valley...

In 1857, the young chemist Prosper Monnet founded in Lyon one of the first French companies producing the aniline, used in dyeing. In 1895, the company became a public limited company under the new name of Société Chimique des Usines du Rhône (SCUR). Among SCUR's banner products were vanillin (1894), "Rodo” synthetic perfumes (1896), Aspirine du Rhône (1902), cellulose acetate (1902), and as soon as 1917, Rhodoïd, a cellulose-based plastic.  In 1902, SCUR launched the Rhodia trademark to designate the vanilla flavor along with some products derived from acetate. 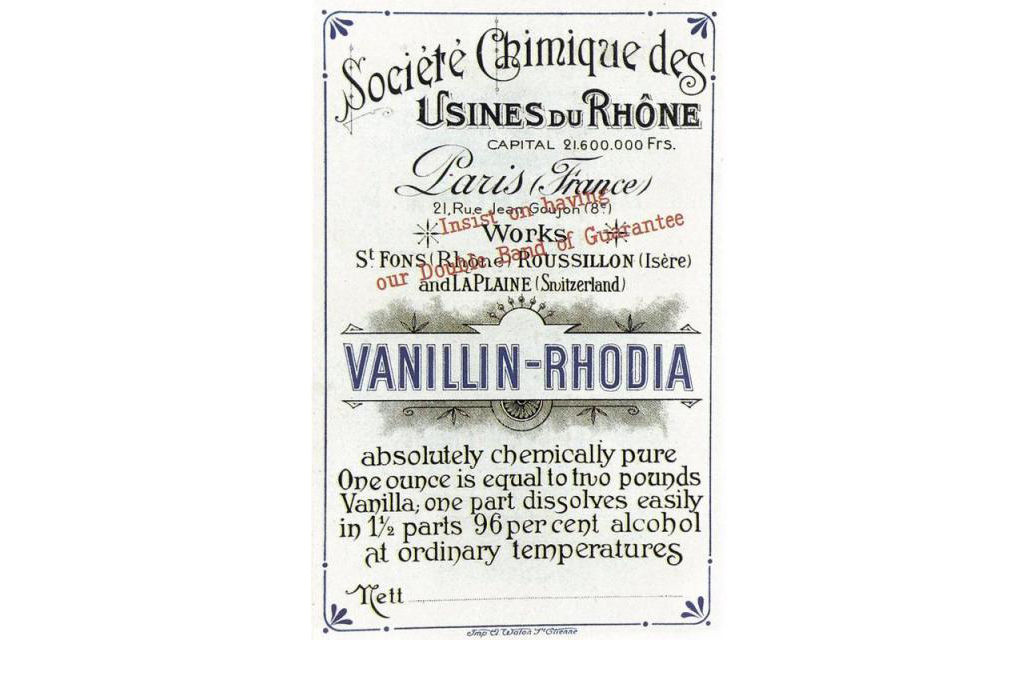