Lansol Fluorchemicals' NOCOLOK® production has been launched in China. Less than a year after the cornerstone ceremony the plant in Quzhou (Zhejiang province) was officially opened on 18 June. Operations will start as planned in the beginning of July. Lansol is a joint venture between Solvay and the Chinese chemical company Sinochem Lantian. Besides Germany and Korea, Quzhou is Solvay’s third production site for NOCOLOK® brazing flux.

The new plant will help Solvay to serve the rapidly growing automotive market and the segment around stationary air-conditioning systems in China. “It is an important building block in our global growth strategy,” Dr. Bernd Wilkes, President of the Global Business Unit (GBU) Special Chemicals at Solvay, said at the official opening ceremony. Around 100 representatives from politics, business and administration came to the ceremony at the Sinochem Lansol plant, as well as customers and employees of Solvay, Lansol and Sinochem Lantian.

With NOCOLOK®, a fluorine Specialty, Solvay is a world market leader in flux agents for aluminum brazing. “Our focus here is to expand our production and development capacities in this specific area, and in the markets that promise sustainable high growth rates, and in which our customers are,“ Horst Kröger,  strategy director of the GBU, emphasized.

The market for stationary air conditioning systems is growing rapidly in China. “This results in enormous opportunities for our NOCOLOK,“ Kröger said. “We are starting with around 3,000 tons per year. But our capacities can also be expanded at short notice.”

The cooperation with Sinochem Lantian, which has existed for years, led to the foundation of the Lansol Fluorchemicals joint venture in 2006. Since April 2013 Solvay has held a majority share in the company. At the Quzhou site near Hangzhou, in Zhejiang province in eastern China, Lansol operates a facility for the production of hydrogen fluoride and high-purity hydrofluoric acid (HF) with around 100 employees. Now, with the addition of the NOCOLOK® production, around 25 jobs have been added. 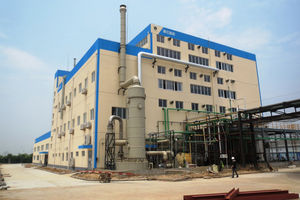 The brazing flux is the standard for the production of heat exchangers for air conditioning systems in the automotive industry. But also the manufacturers of stationary heat exchangers in air conditioning systems and refrigerators are increasingly converting their production from copper to aluminum, using the NOCOLOK® brazing process. Besides Onsan (Korea) and Bad Wimpfen (Germany), Quzhou is Solvay’s third NOCOLOK® plant.

As a global conglomerate with market orientation, Sinochem’s quality product and service is relevant to many aspects of mass economy and people’s wellbeing. Its brand enjoys high reputation and acknowledgement around the world.

Sinochem currently owns more than 300 subsidiaries inside and outside China. The company’s headquarter is located in Beijing. Sinochem Group is China’s earliest entrant in Fortune Global 500 and has entered the list for 22 times, ranking 113th in 2011. Through years of strategic transformation and management overhaul, Sinochem has maintained a sustainable, healthy and rapid development. Sinochem has been rated by SASAC as “top A corporate performance” for 8 years in a row. Sinochem’s vision is to become a respectable company with global influence, making fortune to all the stakeholders and the society. Our 40,000 employees will follow the doctrine of “Creating Value, Pursuing Excellence”, shoulder social responsibility as corporate citizen, and adopt scientific development approach to realize sustainable business potency.