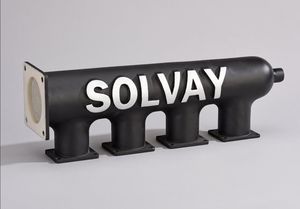 Solvay is the principal material sponsor for the highly anticipated Polimotor 2 project, led by legendary automotive innovator Matti Holtzberg who aims to design and manufacture a next-generation, all-plastic engine for competitive racing in 2016.

“Like the original Polimotor engine concept developed during the eighties, Polimotor 2 is all about highlighting trailblazing polymer technologies, and their potential for revolutionizing automotive performance and manufacturing,” said Holtzberg, who is also president of Composite Castings, LLC, based in West Palm Beach, Fla.“The plenum in the Polimotor 2 concept shares the same basic injection-molded design from the original engine.But we found that a 3D printed version fabricated with Sinterline®Technyl®PA6 technology could perform just as reliably in an engine designed to withstand the rigors of competitive racing.”

Based on the same resin chemistry as Solvay’s proven Technyl®polyamides, Sinterline®PA6 powders are formulated to leverage the benefits of 3D printing for nylon components. Laser sintering and other 3D-printing processes improve productivity by quickly converting digital designs into functional parts without the time or cost required to first build a molding tool and prototype. Thus, they can significantly accelerate the time-to-market for OEMs and Tiers.

Laser sintering applies the energy from a high-precision laser scanner to fuse Sinterline®Technyl®PA6 powders, layer by layer, until they form a finished, highly functional three-dimensional part with enhanced mechanical and thermal properties. Because parts are printed in successive layers, laser sintering can also quickly produce components that integrate complex internal features and functions.

An automotive plenum is the pressurized chamber that uniformly distributes the air flow between an engine’s inlet and cylinders. The plenum in the Polimotor 2 engine will share similar specifications to those in today’s production-scale automobiles, which are typically injection-molded nylon with 2-3 mm wall thickness to withstand the 2-4 bars of positive air pressure inside.

Parts printed from Sinterline®Technyl®PA6 powders are capable of performing reliably in a conventional metal turbocharged engine, where radiant temperatures can reach as high as 250°F (121°C). Notably, however, the plenum in the Polimotor 2 concept will encounter comparably lower temperatures between 150°F (66°C) and 200°F (93°C), due to the low thermal conductivity of the engine’s largely plastic composition.

Solvay Engineering Plastics is the global specialist in polyamide-based engineering plastics, with more than 60 years of experience in the development, manufacture and marketing of a complete range of high-performance materials under the Technyl® brand for demanding applications in automotive, electrical and electronics, construction, consumer goods and other markets. With a growth strategy bolstered by six production sites worldwide, Solvay Engineering Plastics employs its expertise and innovation capabilities in order to serve the needs of its customers more closely through a global network of technical and R&D centres. Learn more on Technyl® brand at www.technyl.com.

As an international chemical group, Solvay assists industries in finding and implementing ever more responsible and value-creating solutions. Solvay generates 90% of its net sales in activities where it is among the world's top three players. It serves many markets, varying from energy and the environment to automotive and aeronautics or electricity and electronics, with one goal: to raise the performance of its clients and improve society's quality of life. The group is headquartered in Brussels, employs about 26,000 people in 52 countries and generated 10.2 billion euros in net sales in 2014. Solvay SA (SOLB) is listed on Euronext in Brussels and Paris (Bloomberg SOLB:BB– Reuters:SOLB.BR).