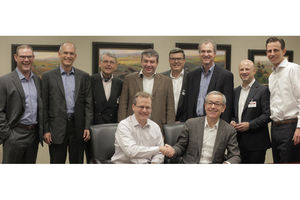 Brussels, April 25th, 2014--- Solvay and INVISTA have renewed their joint venture agreement to manufacture adiponitrile (ADN), a key intermediate in the production of Polyamide 6.6.

This long-term agreement clarifies the rules of control and operations of Butachimie, in which both companies own a 50 percent stake. Butachimie operates the world’s largest ADN production facility in Chalampé, France.

Both parties have agreed that Butachimie would benefit from the latest and best available butadiene-based ADN technology, which is owned exclusively by INVISTA.

The agreement also gives Solvay an option to reserve capacity in the new ADN plant INVISTA plans to build in China.