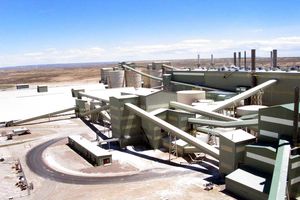 Brussels, February 4, 2014 --- Solvay plans to increase its annual production capacity of natural soda ash at its Green River plant in Wyoming by 150,000 metric tons as of early next year, to meet growing demand of its U.S. export markets.

Solvay Soda Ash and Derivatives is a world leader in its sector, with soda ash serving the glass, detergent and chemical markets and with sodium bicarbonate and trona serving the food, animal feed, flue gas cleaning and healthcare markets. The unit has 12 industrial sites worldwide, more than 4,000 employees and serves 90 countries.

As an international chemical group, SOLVAY assists industries in finding and implementing ever more responsible and value-creating solutions. The Group is firmly committed to sustainable development and focused on innovation and operational excellence. Solvay serves diversified markets, generating 90% of its turnover in activities where it is one of the top three worldwide. The group is headquartered in Brussels, employs about 29,000 people in 55 countries and generated 12.4 billion euros in net sales in 2012. Solvay SA is listed as SOLB.BE on NYSE Euronext in Brussels and Paris (Bloomberg: SOLB:BB - Reuters: SOLB.BR).
Related press releases
View all news
Press releases

Solvay to reinforce its global leadership in soda ash