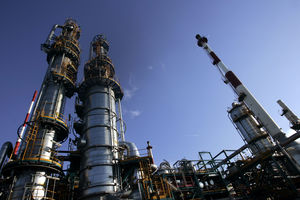 Lyon, France, October 4th 2013 --- As part of its ongoing efforts to optimize its adipic acid production line, Solvay Polyamide & Intermediates is installing a new process at its industrial plant in Chalampé (France) aimed at reducing the plant’s energy consumption by 8MW and CO2 emissions by 11,000 tonnes annually.

“This programme announced last 21 June is in place, and we are perfectly aligned with the schedule and deployment stages. As planned, the intervention will require the shutdown of the manufacturing process. The plant’s adipic acid production will therefore be shut down in early October,” pointed out Christophe Bertrand, Industrial Director of Polyamide & Intermediates.

The deployment of this new process will require five weeks of work. However, a complete restart of the plant’s adipic acid production is not envisaged. “We will adjust our production to changes in demand,” explained Yannick Adnot, Director of Polyamide & Intermediates Europe. “Faced with the uncertainty of long market conditions, with an offer exceeding the demand, it is our responsibility as a manufacturer to optimize our production accordingly. That too is part of our commitment to maintain and grow our business sustainably,” he indicated.

As a reminder, this investment programme aims to tighten control over the plant’s costs by strongly reducing its energy consumption. It demonstrates the Solvay Group's commitment to operational excellence through energy efficiency programmes and initiatives aimed at reducing its carbon footprint. This initiative is in line with the sustainable development commitments and objectives set by the Group.

Solvay Polyamide & Intermediates is a major global producer of polyamide 6.6 intermediates and polymers focused on being a reliable partner to customers worldwide. P&I develops and provides polyamide 66 intermediates from HMD, Adipic acid, Nylon Salt down to polymers through 8 industrial plants, 3 research & development centers and its sales offices in the world.

As an international chemical group, SOLVAY assists industries in finding and implementing ever more responsible and value-creating solutions. The Group is firmly committed to sustainable development and focused on innovation and operational excellence. Solvay serves diversified markets, generating 90% of its turnover in activities where it is one of the top three worldwide. The group is headquartered in Brussels, employs about 29,000 people in 55 countries and generated 12.4 billion euros in net sales in 2012. Solvay SA SOLB.BE) is listed on NYSE Euronext in Brussels and Paris (Bloomberg: SOLB.BB- Reuters: SOLBt.BR).