Solvay materials have been traveling to outer space for more than 50 years!

Discover the Future of Space

From space suits to spaceships, Solvay composites and specialty polymers are out of this world 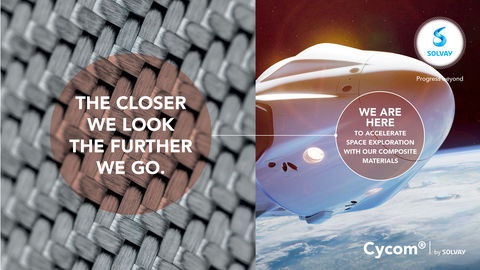 Half a century after the first human being set foot on the Moon, the space race is still going strong, and Solvay is still there to support it!

A lot has changed since the early days of the 1950s and 60s, when the USSR and the USA were in tight competition to run the most advanced space programs. In the 2020s, there is renewed enthusiasm for the space race, with an increasing number of countries as well as private companies advancing the technology for launch applications.

In the US, NASA has plans for its astronauts to return to the moon by 2024 and has announced a 2021 budget of more than $25 billion for their human space exploration program. “We will continue to provide our customers with material solutions to overcome the most challenging environments the space industry will experience in future missions,” says Dan Eskelsen, Product Portfolio Manager at Solvay’s Composite Materials business unit. “Solvay materials were on board the Apollo 11 mission that sent humans to the Moon for the first time, and we will support future trips to the lunar  surface.”

Customers launch and space requirements are strictly centered around quality and reliability.  With manned space flight and very expensive payloads they must perform as designed, every time. With our extensive 50+ years experience and commitment to product quality our customers continue to rely on Solvay as a partner to deliver mission success. 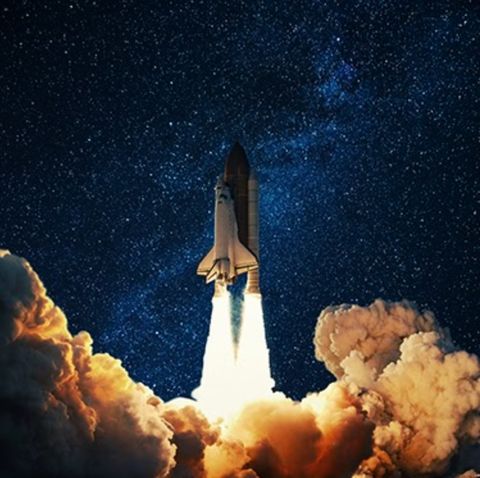 Did you know Solvay materials were on board the Apollo 11 mission that sent humans to the Moon for the first time? The Group's Udel® polysulfone (PSU) polymer was developed in 1965, just in time to be used to make the visors on Buzz Aldrin and Neil Armstrong's space suits as they set foot on the Moon in July 1969. Udel® PSU was the material of choice thanks to it being a tough and transparent plastic that can resist extremely high temperatures.

But Solvay’s escapades with space exploration go back even further than that... in the 1950s, scientists working on the very first space programs were looking for materials capable of withstanding the incredibly high temperatures produced by rocket engines and re-entry into the Earth’s atmosphere. Their search led them to identify certain materials used in the welding industry produced by, you guessed it: Solvay.

These materials were ablatives. They provide the thermal protection systems (TPS) on a rocket motor nozzle: as the hot gases exit the rocket motor, ablative material chars, which creates an additional thermal insulation layer protecting the nozzle structure. Our ablatives have been used in many historical space programs – Gemini, Saturn and Apollo to name a few. They were present in the rocket motor that slowed down the lunar module that safely landed Neil Armstrong and his fellow astronauts on the moon in 1969. From the 1970s to 2011, Solvay supported the NASA Space Shuttle Solid Rocket Motors (SRM’s) nozzles, with over 14,500kg of ablative materials for each launch. “Solvay ablative materials must perform flawlessly every time to assure mission success,” sums up Dan.

Also in the nozzle, where the flow of burning propellant gases causes the rocket to move forward, Solvay provides several materials that are critical to its functioning. For example Cycom® 6001, a phenolic glass material that is wrapped over the nozzle’s exit cone to provide structural and thermal integrity (keep in mind that the propellant gases reach 2,000°C and come out at hypersonic speeds) and Cycom® 934, which is used for flex seal components allowing the nozzle to move while sealing the hot gases, enabling to steer the rocket.

One small step for polymers…

Beyond ablatives, other Solvay materials are used by the space industry, especially composites that offer the advantage of replacing metal while saving considerable weight, thus contributing to solve one of the biggest challenges in the aerospace industry. As a matter of fact, space exploration is just another area of transportation where Solvay’s composite materials offer precious lightweighting possibilities.

One example can be found in the manufacturing of payload fairings, the protective nose cones that protect the payload (typically a satellite) being sent into space. Lightweighting is no small concern here. “For space applications, weight is especially critical because every additional kilo costs about $10,000 to launch into Earth orbit,” explains Dan. “The composites used in space structural applications often exhibit special characteristics for space use, but they have a resemblance to the materials employed for aircraft manufacturing.”

The world’s leading manufacturer of payload fairings, Swiss engineering company RUAG, uses Solvay’s prepregs and resin systems, specifically the MTM®46 epoxy resin. This product was especially developed for extreme applications such as space programs: it offers stiffness, impact resistance and thermal performance that is actually superior to those of metal. Thanks to this material, not only are these huge fairings (they can be longer than 25 meters long) 30% lighter than their metal equivalent - which means rockets use less fuel and payloads can be heavier - they are also cheaper and easier to make.

This is because MTM®46 is an out-of-autoclave (OoA) thermoset: you can cure it in a huge oven instead of in a high temperature (and very expensive) autoclave, which cannot accommodate very large parts. The result is that RUAG can make its payload fairings in just two halves instead of 18 to 20 parts that need to be assembled, saving time and money while reducing opportunities for defects. Such a high-performance OoA composite system is Solvay’s creation and unique on the market.

Solvay has had a very early involvement in the space market, offering the broadest portfolio of product options dedicated to space applications, coupled with the most comprehensive material performance database in the industry.

The sky isn’t the limit

Finally, besides composites, one other category of our products plays a critical albeit unexpected part in space programs: lubricants. Solvay’s Fomblin® PFPE has been the go-to lubrication solution for space vehicles built by both American and European agencies for the past 25 years, including NASA’s 1997 Mars Pathfinder and its famous Sojourner® Rover, for which a grease using Solvay’s lubricant was specially formulated.

It’s quite clear that in the near future, growth in the space industry is only going to continue, providing numerous opportunities for Solvay and its high-performance materials. The increasing role played in the industry by private companies and the upcoming development of space tourism (we may see tourists visit the space station as early as 2023!) are deep-seated trends that will further push developments and innovation, and we will continue to be up to the task!

Several reasons explain why we’ve remained a leading provider of composites for the space industry throughout the decades: “As a pioneer in composites, Solvay has had a very early involvement in the space market, offers the broadest portfolio of product options dedicated to space applications, coupled with the most comprehensive material performance database in the industry,” sums up Dan. “We welcome working on the challenges involved with the next generation of space vehicles.”

In other words, whatever the future of space exploration brings, Solvay plans to be a part of it.