A natural functional active ingredient for long and healthy hair

90%
of damaged hair are repaired

Trimming hair is no longer the only cure for split ends. Research and Innovation (R&I) teams at Solvay have developed the first-ever fix for split ends that works miracles on damaged hair. After a single application, Polycare® Split Therapy repairs damaged hair by 90% to deliver long-lasting sealing of split ends, leaving the hair looking and feeling healthy.

What does Polycare® Split Therapy bring?

The Solvay R&I team has a solution for curing damaged hair with new Polycare® Split Therapy, an efficient guar-based solution that formulators can easily use to offer real reparation in hair care and deliver long-term consumer satisfaction.
Polycare® Split Therapy has an innovative structure that delivers a host of advantages:

“You can continue washing your hair with neutral shampoo, comb it and use a hot iron on it, and most of the repair will be retained, especially after an initial application as a serum.”

Split ends are a sign of unhealthy, damaged hair and often accompanied by breakage, dullness and premature aging.

Polycare® Split Therapy proves its efficiency by demonstrating its inherent properties. Statistical analysis was done to show Polycare® Split Therapy’s performance and durability with internal tests on tresses validated by an external laboratory. To begin the testing, split ends were counted one-by-one before and after treatment to calculate the percentage of reparation. 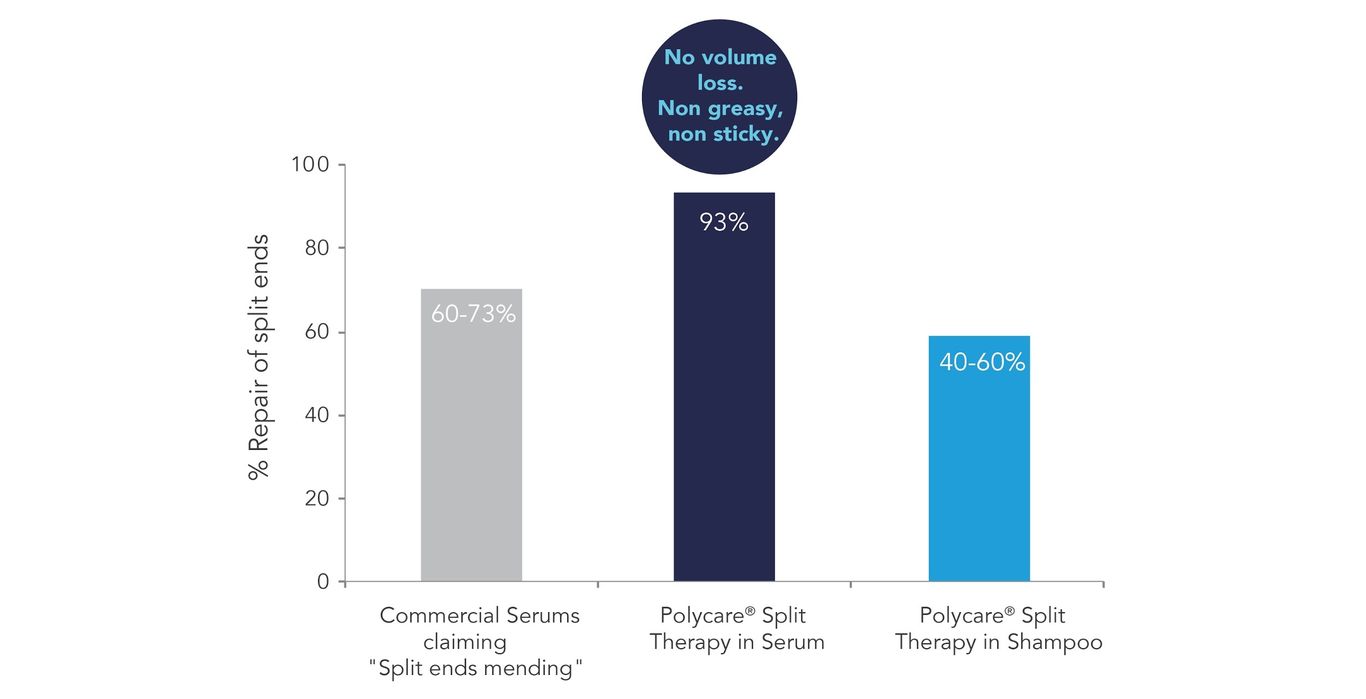 In terms of performance, 90% to 95% of split ends were repaired after one serum application, versus 60% to 73% of reparation with commercial benchmarks. The split ends were fully sealed after just three applications using Polycare® Split Therapy. In testing its effectiveness in a shampoo, the results were just as promising: after just one washing, 40% to 60% of the hair was repaired.

Polycare®️ Split Therapy in the News!

Split decisions: what it takes to ensure healthy hair

The secret? A novel guar derivative, making for a highly naturally-derived active ingredient that works miracles on damaged hair.

Polycare® Split Therapy is a natural-based, functional active that offers real and quantifiable hair cure upon first use and long-lasting sealant properties even after repeated use. Because this ethically and responsibly sourced ingredient is versatile and easy to use, formulators will find Polycare® Split Therapy to be ideal for designing products that can satisfy multiple consumer needs.

Looking for opportunities in the overlooked textured hair market

We combine our dedication to engineering the most advanced hair care solutions with a passion for creating sustainable materials for natural hair care products.