Created in 2013, the Solvay Prize perpetuates Ernest Solvay’s lifelong support of and passion for scientific research. The award recognizes major scientific discoveries with the potential to shape tomorrow’s chemistry and help human progress. It highlights the essential role of science and chemistry in helping to solve some of the world’s most pressing challenges. Every two years, the most promising project is awarded a €300,000 prize.

The 2022 Solvay Prize goes to Professor Katalin Karikó for her work on the biochemical modification of synthetically produced messenger RNA (mRNA), which has enabled the rapid development of vaccines and saves many lives. The award ceremony will be livestreamed on March 29. 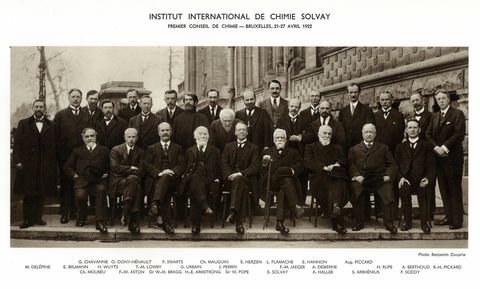 After the success of the Solvay conferences in Physics, which convened the brightest scientific minds, including Albert Einstein, Marie Curie, Henri Poincaré, and Martin Knudsen, Ernest Solvay organized a similar gathering focused on chemistry in 1922. In this photo, Ernest Solvay is surrounded by several Nobel Prize laureates who gathered for this first chemistry conference.

Science-based innovation drives Solvay’s innovation strategy today and is one of Solvay’s key differentiators among its competitors.

The Solvay Prize continues this legacy and the 2022 award will mark the 100-year anniversary of the first Solvay Conference for Chemistry.

Learn more about the international jury Sven Lidin, born in 1961 in Lund, is a Swedish chemist and professor of inorganic chemistry at Lund University.

Sven Lidin defended his dissertation in 1990 at Lund University. During the years 1990-1991, Lidin was a Post-doc at the Australian National University in Canberra, Australia and the Max Planck Institute for Solid State Physics in Stuttgart, Germany, to be appointed Associate Professor at Lund University in 1991. In 1996, he became professor of inorganic chemistry at Stockholm University. In 1997 he was awarded the Göran Gustavsson Prize in Chemistry by the Royal Swedish Academy of Sciences and in 1999 the Norblad Ekstrand Medal by the Swedish Chemical Society. In 2009 it was announced that Lidin had been recruited to Lund University, among other things for his ability to lead other researchers.

Lidin is an active researcher at the Center for Analysis and Synthesis at the Department of Chemistry, Lund University.

Sven Lidin has, in order to solve the so-called third task for researchers, taken on a number of assignments in society and business. He is a member of the boards of the technology company X-Brane AB and sits on SPAGO Imaging AB's scientific council.

At the Nobel Prize ceremony on December 10, 2011, Lidin gave the presentation speech of this year's winners in chemistry Steven Chu, born in 1948 in St. Louis (Missouri), is a physicist and politician US.

Born to Chinese immigrant parents, Steven Chu received his bachelor's degree in 1970 from the University of Rochester and his doctorate from the University of California at Berkeley in 1976, then remained two years at Berkeley as a post-doctoral researcher before joining the laboratories. Bell. It is in these laboratories that he and his team are working on laser cooling of atoms.

He is co-laureate with Claude Cohen-Tannoudji and William D. Phillips of the Nobel Prize in Physics of 1997 "for the development of methods used to cool and confine atoms using laser light". He left Bell Laboratories in 1987 to become professor of physics at Stanford University, where he headed the physics department from 1990 to 1993 and from 1999 to 2001. He was hired as director of the Lawrence Berkeley National Laboratory in 2004. Since 2020, he is Chairman of the Scientific Council of the Higher School of Industrial Physics and Chemistry of the City of Paris.

On January 20, 2009, Steven Chu was appointed United States Secretary of Energy in President Barack Obama's administration. He is in charge of the application of the ecological and energy program desired by President Obama, himself being a supporter of renewable energies. The 1st June 2009, he announced the creation of a fund of US $ 256 million to improve the energy efficiency of major industries in the United States. He said he did not want to be reappointed during the second term of the Obama administration and left his post in 2013. Daniel Poneman is acting before the appointment of Ernest Moniz to the post.
Steven Chu then becomes a professor at Stanford University again.
Chu's research has focused primarily on atomic physics by developing methods to cool and capture atoms using lasers. While at Stanford, his research extended to polymer physics and biophysics.

Chu along with three other professors launched the Bio-X program, an interdisciplinary approach to biology and medicine. Bernard Lucas Feringa, born in 1951 at Barger-Compascuum, is a Dutch chemist who won the 2016 Nobel Prize for Chemistry, which he obtained for his work with Jean-Pierre Sauvage and James Fraser Stoddart on the design and synthesis of molecular machines.

Ben Feringa obtained a doctorate in 1978 entitled "Asymmetric oxidation of phenols. Atropisomerism and optical activity" at the University of Groningen under the supervision of Professor Hans Wijnberg. After a short period at Shell in the Netherlands and the United Kingdom, he was appointed Professor at the University of Groningen in 1984 (Lecturer) then Full Professor (Full Professor), succeeding Professor Wijnberg, in 1988. The beginning of his career was focused on homogeneous catalysis and catalic oxidations, focusing in particular on stereochemistry with major contributions in the field of enantioselective catalysis, including monophos ligands used in hydrogenations asymmetric, the additions conjugated asymmetric reactive organometallic, including with organolithium highly reactive, the photochemistry organic and stereochemistry. In the 1990s, Ben Feringa's work in stereochemistry led to major contributions in photochemistry, producing the first molecular rotary motor started by monodirectional light and later a molecular car, known as nano car, driven by electrical impulses.

Bernard Feringa holds more than 30 patents and published more than 650 articles in peer-reviewed journals in 2016, he is cited over 30,000 times and has an h index of over 90. He has supervised over 100 doctoral students during his career. Susumu Kitagawa, winner of the 2017 Chemistry for the Future Solvay Prize, professor at Kyoto University

Susumu Kitagawa, born in 1951, is a Japanese chemist working in the field of coordination chemistry, with a specific focus on the chemistry of organic–inorganic hybrid compounds, as well as chemical and physical properties of porous coordination polymers and metal-organic frameworks in particular. He is currently a Distinguished Professor at Kyoto University, in the Institute for Integrated Cell–Material Sciences, of which he is co-founder and current director.

From 1975 to 1979, Professor Kitagawa pursued and obtained a PhD degree in hydrocarbon chemistry, at Kyoto University, where he had previously done his undergraduate studies. He was appointed in 1979 at Kindai University as Assistant Professor, promoted first to Lecturer in 1983, and in 1988 to Associate Professor. In 1992, he became Professor of Inorganic Chemistry at Tokyo Metropolitan University and in 1998 Professor of Inorganic Functional Chemistry at the University of Kyoto, in the Department of Synthetic Chemistry and Biological Chemistry. In 2007 he co-founded Institute for Integrated Cell-Material Sciences and was named Deputy Director. Since 2013 he is the Director of the Institute.

He is a pioneer and leading scientist in the field of metal-organic frameworks (MOFs), a new class of nanoporous materials. MOFs look like small cages made from networks of metallic knots linked by organic molecules. The “holes” in the network are much, much smaller than the diameter of a single human hair and could capture gases like CO2, methane or hydrogen with the purpose of re-using them for applications in chemistry or energy. The cage size can be adapted to the type of gas to be captured.

The 2017 Chemistry for the Future Solvay Prize is awarded to Professor Susumu Kitagawa for his work in developing metal-organic frameworks, a new class of materials with a range of potential future applications, including the capturing of polluting gases. Geraldine Lee Richmond, Presidential Chair in Science and Professor of Chemistry at the University of Oregon, was nominated for the U.S. Under Secretary of Energy for Science

Geraldine Lee Richmond, born in 1953 in Salina, Kansas is an American chemist and physical chemist who was nominated by President Joe Biden to serve as Under Secretary of Energy for Science in the US Department of Energy. Richmond is the Presidential Chair in Science and Professor of Chemistry at the University of Oregon (UO). She conducts fundamental research to understand the chemistry and physics of complex surfaces and interfaces. These understandings are most relevant to energy production, atmospheric chemistry and remediation of the environment. Richmond has served as president of the American Association for the Advancement of Science, and she received the 2013 National Medal of Science.

Since 1985, Richmond has been at UO, from 1985 to 1991 as an associate professor of chemistry, and as a professor since 1991. Until 1995 she was director of the Chemical Physics Institute. From 1998 to 2001 she was the Knight Professor of Liberal Arts and Sciences and between 2002 and 2013, the Richard M. and Patricia H. Noyes Professor of Chemistry at the UO. Richmond's scientific research encompasses the chemical and physical processes that occur in complex surfaces and boundary layers including the structural and thermodynamic properties of solid/liquid and liquid interfaces. Much of her work has utilized vibrational sum-frequency spectroscopy for studying surfaces and interfaces; her review on the technique has been cited nearly 800 times since it was published.

Using these spectroscopic techniques with mixtures of H2O, D2O, and HOD, Richmond has studied the nature of hydrogen bonding surface structures and in the interfacial region. She has also studied how these structures are perturbed by electrolytes like simple sodium halide salts or acids or bases, and by surfactants. In examining the behavior of water at hydrophobic surfaces, Richmond found that weaker dipoles in an organic phase are more effective for orienting individual water molecules near the interface. The interactions at aqueous/hydrophobic interfaces are important for understanding biochemical properties at boundaries such as cell membranes, as is the solvation of charge in such environments. The study of zwitterionic species like amino acids is important for similar reasons.

Dame Carol Vivien Robinson, University Chair of Dr. Lee’s Professor of Chemistry and is the first Director of the Kavli Institute for Nanoscience Discovery at Oxford

Dame Carol Vivien Robinson, born in 1956 at Bradley, is a British chemist.

Carol Robinson holds the University Chair of Dr. Lee’s Professor of Chemistry and is the first Director of the Kavli Institute for Nanoscience Discovery at Oxford.  She is recognized for establishing mass spectrometry as a viable technology to study the structure, function and interactions of proteins and their complexes.  Her collaborations span both academic and industrial laboratories and in 2016, her spin-out company, OMass Technologies, was founded.  Now trading as OMass Therapeutics the company uses high definition native mass spectrometry to develop drug therapies for use in immunologic and genetic disorders.

Carol graduated from the Royal Society of Chemistry in 1979 and completed her Ph.D. at the University of Cambridge. She took a career break of eight years to bring up her children and later became the first female Professor of Chemistry at the University of Cambridge (2001-2009). She has held Dr. Lee’s Chair in Chemistry since 2009 and is Oxford’s first female Professor of Chemistry. Her work has attracted over twenty awards and prizes including most recently, the Othmer Gold Medal from the Science History Institute (2020), Royal Medal A from the Royal Society, Novozymes Prize from the Novo Nordisk Foundation and Stein and Moore Award from the Protein Society (2019).  Carol is the former President of the Royal Society of Chemistry (2018-2020) and a Foreign Associate of the National Academy of Sciences USA. She holds fifteen honorary doctorates and offices and received a DBE in 2013 for her contributions to science and industry

Patrick Maestro, Member of the Académie des Technologies in France and Scientific Director of Solvay, was at the origin of the creation of several joint teams between Solvay, CNRS, and universities worldwide.

The Solvay Prize was first awarded in 2013 to Professor Peter G. Schultz, in 2015 to Professor Ben Feringa (winner of the 2016 Nobel Prize in Chemistry), in 2017 to Professor Susumu Kitagawa, and in 2020 to Professor Carolyn Bertozzi. Breakthrough discovery for biotherapeutics takes the Chemistry for the Future Solvay Prize!