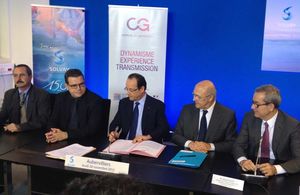 Brussels, November 28th, 2013 ---Jean-Pierre Clamadieu, CEO of Solvay, today welcomed French President François Hollande, and the Minister of Labour, Employment, Vocational Training and Social Dialogue Michel Sapin, at the Group’s research laboratory in Aubervilliers, close to Paris. The President and the Minister were present to sponsor the first agreement that Solvay signed in France with the CFDT and CFE-CGC trade unions on the generation contract.

Under the terms of this generation contract, Solvay has committed itself from 2013 to 2015:

- to increase the number of young hires on permanent contracts: one out of two new employees will be younger than 26 years

- to significantly raise the number of work-study contracts (+25%)

- to retain seniors: at least 13% of the workforce will be 57 years and older

- to limit the use of temporary staff to 1% of employees

- to accept all skill assessment requests from employees older than 45 in line with an employee’s individual training entitlement.

“The chemical profession is complex and requires high-level skills. For instance, it takes two to four years of training to be a qualified operator at one of our industrial sites. With this generation contract, we are showing our commitment to employ young people, to transmit our quality knowledge and skills and to offer them a rich and diversified career. At the same time, we commit to retain and motivate our "seniors" who represent one-third of our staff and whose experience is absolutely essential to the company,” said Jean-Pierre Clamadieu, CEO of Solvay.