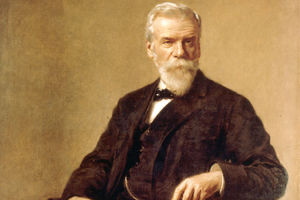 Professor Schultz’s work has resulted in new methods to synthesize molecules with novel chemical and biological properties and has impacted chemistry, materials science and medicine

Brussels, 26 September 2013-- The “Chemistry for the Future Solvay Prize”, a bi-annual EUR 300,000 prize created by the Belgium based Solvay Group, is awarded to Professor Peter G. Schultz, professor at the Scripps Research Institute in California, and Director of the California Institute for Biomedical Research.

The formal statement of the jury chaired by Hakan Wennerström, Professor at the University of Lund, motivates the decision as follows: "For Professor Schultz’s multiple scientific contributions at the interface between chemistry and biology, in particular for the exploitation of molecular diversity and the rational expansion of the genetic code of the living organisms.”

“I am obviously delighted to win the Solvay Prize”, said Professor Schultz. “It is a wonderful recognition for all of the hard work of a terrific group of present and past co-workers. I am very much looking forward to travelling to Belgium on 4 December for the award ceremony.”

The Chemistry for the Future Solvay Prize rewards a major scientific discovery that could shape tomorrow's chemistry and help human progress. The EUR 300,000 Prize will be awarded every two years. It was announced on the occasion of the 150th anniversary of the creation of the chemical company Solvay by Ernest Solvay, and to perpetuate the founder’s commitment as a strong supporter of scientific research. It is intended to endorse basic research and underline the essential role of chemistry as a science and an industry to help solve some of the most pressing issues the world is facing. The prize will be given to Professor Peter G. Schultz during an award ceremony at the Palais des Académies in Brussels, Belgium, on 4 December 2013.

As an international chemical group, SOLVAY assists industries in finding and implementing ever more responsible and value-creating solutions. The Group is firmly committed to sustainable development and focused on innovation and operational excellence. Solvay serves diversified markets, generating 90% of its turnover in activities where it is one of the top three worldwide. The group is headquartered in Brussels, employs about 29,000 people in 55 countries and generated 12.4 billion euros in net sales in 2012. Solvay SA SOLB.BE) is listed on NYSE Euronext in Brussels and Paris (Bloomberg: SOLB.BB- Reuters: SOLBt.BR).

2015 Chemistry for the Future Solvay Prize