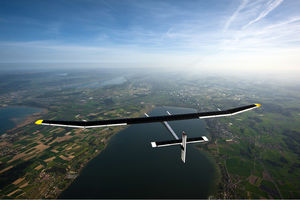 Brussels, March 30, 2015--- In the heart of the Paris Cité des sciences et de l’industrie, Solvay is exhibiting the prototype Solar Impulse 1, the solar plane which carried out a large number of missions, including a flight across America in 2013 without using a drop of fuel.

In March 2014 Solvay became the owner of this first solar plane. A true "flying laboratory", the plane conveys a message, raising people's awareness to the challenges of the energy transition and sustainable mobility, and illustrating in a very concrete way the solutions that chemistry can provide towards developing a "low-carbon" economy".

“Exhibiting Solar Impulse 1 at the Cité des sciences et de l'industrie gives the plane a second life, sending out an optimistic message to younger generations that the impossible can be made possible by audacity, innovation and clean technologies. From its home in Paris, Solar Impulse 1 will thus be accompanying its big brother Solar Impulse 2 in the latter's ambitious round-the-world flight. The plane thus has great symbolic value, all the more so on account of the COP 21 to be held this year”, said Claude Michel, head of the Solar Impulse partnership at Solvay.

The Paris Cité des sciences et de l’industrie, Europe's No.1 science museum welcoming close to two million visitors each year, is exhibiting Solar Impulse 1 in its main hall, backed up by a specific multimedia show and a flight simulator for kids.

Since joining the Solar Impulse project as its leading partner in 2004, Solvay has constantly played an active role, making available its scientific competence and know-how in particular to develop advanced materials. A large number of the challenges facing Solar Impulse involve research and development fields in which Solvay is involved, such as renewable energy and sustainable mobility.

Commissioned in December 2009, the prototype Solar Impulse 1 made 77 flights, establishing 8 FAI (Fédération Aéronautique Internationale) records in the course of its 480 flight hours. Unveiled in April 2014, the second version of the plane, Solar Impulse 2, took off on its round-the-world solar-powered flight in March 2015. Starting out from Abu Dhabi on 9 March and after a short flight to Muscat, the capital of Oman, Solar Impulse 2 flew over to Ahmedabad in India on 10 March. From there, it flew to Varanasi (India) and Mandalay (Myanmar). It is currently flying to Chongqing in China. The next stages will take it to Nanjing (China) and to Hawaii after a very long five-day and five-night flight. From there, it will fly across America and over the Atlantic to Europe or North Africa, before heading back to Abu Dhabi.

To reconcile light weight and performance under extreme climatic conditions where temperatures fluctuate between -40 °C and +40°C, Solvay has been involved in several fields:

And for the pilots' well-being:

A 6,503 km flight without using a single drop of fuel: mission accomplished for solvay chemicals with solar impulse!