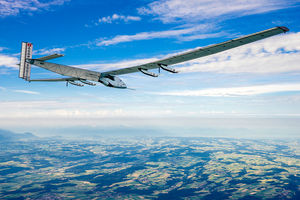 Brussels, April 21, 2016 --- Solvay is delighted to accompany Bertrand Piccard and André Borschberg in the second and final part of their world tour with Solar Impulse 2 (Si2), which resumed its flight today from Hawaii (United States) to San Francisco to gradually head 17,000 km back to Abu Dhabi (United Arab Emirates) – on just the sun’s energy.

Ever since Solvay became the first partner of the Solar Impulse project in 2004, its research and innovation teams have been essential in minimizing the weight of the plane through Solvay’s unique and leading expertise in ultra-strong, ultra-light materials and in maximizing the energy storage of its batteries, allowing it to also fly during the night. Si2, which last year successfully accomplished the first part of its world tour, has a 72 meter wing span but weighs about as much as a jeep and its horse power is similar to that of a motorbike.

“We wish both pilots the best of luck in completing this audacious adventure and wish Bertrand Piccard a safe kick-off flight to the U.S. mainland,” said Jean-Pierre Clamadieu, CEO of Solvay. “Solvay as Solar Impulse’s first historical partner is particularly proud this time: through our recent acquisition of Cytec, more than half of this plane’s structure consists of Solvay materials. Once more, Solvay’s ‘flying lab’ will show our contribution in making the impossible possible with our innovative solutions in clean energy and in CO2 emission reductions.”

All these materials are already part of our daily lives, in applications ranging from automotive and aerospace to construction and smart devices.

Si2 will visit several U.S. destinations, fly to Europe or North Africa – all determined by weather conditions – and then return to Abu Dhabi. The solar plane’s track record of success peaked last year when André Borschberg crossed the Pacific Ocean from Nagoya (Japan) to Hawaii in an unprecedented flight of 5 days and nights.

An international chemical and advanced materials company, Solvay assists its customers in innovating, developing and delivering high-value, sustainable products and solutions which consume less energy and reduce CO2 emissions, optimize the use of resources and improve the quality of life. Solvay serves diversified global end markets, including automotive and aerospace, consumer goods and healthcare, energy and environment, electricity and electronics, building and construction as well as industrial applications. Solvay is headquartered in Brussels with about 30,900 employees spread across 53 countries. It generated pro forma net sales of € 12.4 bn in 2015, with 90% made from activities where it ranks among the world’s top 3 players. Solvay SA (SOLB.BE) is listed on Euronext in Brussels and Paris (Bloomberg: SOLB:BB - Reuters: SOLB.BR).