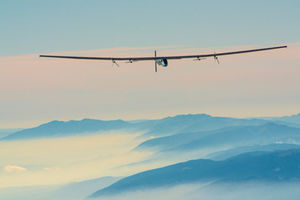 Brussels,  March 9, 2015 --- Solvay is proud to stand side-by-side with Solar Impulse 2 (Si2) and its two pilots now that the solar airplane has taken off from Abu Dhabi, United Arab Emirates, to start its tour around the world without using a single fuel drop.

“The Solar Impulse adventure represents innovation without boundaries and Solvay’s ability to demonstrate its power in finding solutions to develop and promote low carbon technologies,” said Jean-Pierre Clamadieu, Chairman of the Executive Committee and CEO of Solvay. “We wish both pilots Bertrand Piccard and André Borschberg a safe flight and great success in their round-the-world tour.”

Travelling at speeds between 50 and 100 kilometres per hour, Si2 will fly 25 days spread over five months, equipped with 15 Solvay products found in more than 6,000 components, including its high-performance plastics, fibers, films, lubricants and coatings.

Si2 is scheduled to stop in 12 locations, including layovers in India, China, the United States and Europe or Northern Africa, before returning to Abu Dhabi. André Borschberg is piloting the first 400 km leg of the 12 hour journey from Abu Dhabi to Muscat, Oman. Among the journey’s main challenges is the non-stop flight of five days and nights from China to Hawaï.

Right from the beginning and for 12 years now, Solvay has been part of this pioneering project, turning challenges into significant market opportunities in lightweighting, energy storage and efficiency. With this “Flying Lab” Solvay has proven its expertise in advanced materials and sustainable energy, which enables Solar Impulse to fly around the clock only on the sun’s energy.