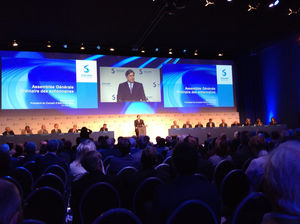 Brussels, May 14th, 2014 --- Solvay held yesterday its Ordinary and Extraordinary General Shareholder Meetings at its headquarters in Brussels, Belgium.

Shareholders voted in favor of all the resolutions proposed at the Ordinary Meeting. More specifically, they approved the payment of a gross dividend of € 3.20 per share for the year 2013, stable compared to 2012. After deduction of the prepayment made on January 23th, 2014 of € 1.3333 gross per share, the balance of the dividend will amount to € 1.8667 gross per share  payable on May 20th, 2014.

During the Extraordinary Meeting, the shareholders approved all the resolutions except those related to the renewal of authorizations for the acquisition of own shares.

Details of the resolutions and voting results and replay of the shareholder meeting are available on Solvay’s website, Investors section: