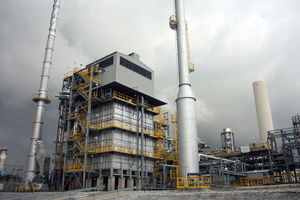 Brussels, Belgium/Al Khobar, Saudi Arabia, September 2, 2013- Saudi Hydrogen Peroxide Company, a newly created joint venture between Sadara Chemical Company (Sadara) and the Solvay Group (Solvay), announced today that they have begun constructing one of the world’s largest hydrogen peroxide (HP) plants in the Kingdom of Saudi Arabia. The plant will provide a key raw material to Sadara and will strengthen Solvay’s global leadership position in HP technology and markets.

With a capacity exceeding 300,000 metric tons per year (MT/yr) and a planned start up in 2015, the mega plant is being built at Sadara’s chemical complex in Jubail Industrial City II. It will be the first HP facility in the Kingdom.

Sadara will use output from the plant as a raw material for the HP-to-propylene oxide (HPPO) manufacturing plant on the site, thereby supporting its propylene oxide (PO) derivative units that produce polyols and propylene glycol.

For Solvay, this will be its third joint venture mega HP plant following the 230,000 MT/yr plant in Antwerp, Belgium, a JV with The Dow Chemical Company (Dow) and BASF, and the 330,000 MT/yr mega plant in Map Ta Phut, Thailand, a JV with Dow.

“We are delighted to be partnering with Solvay, a global leader in HP, to build this world scale plant to feed our PO, PO derivatives and Polyurethane business,”said Ziad Al-Labban, CEO of Sadara. “This partnership will provide us with a stable and reliable supply of a key raw material which is critical to support our Polyurethane-based customers and downstream value chains.”

“Solvay’s high-yield HP technology enables such unique, large scale plants to benefit from advantages in both specific investment and production costs,”said Pascal Juery, President of Solvay's Essential Chemicals business unit. “We are proud to establish the first HP manufacturing activity in the region with our leading technology and look forward to meeting future demand of the local HP market.”


SADARA is a joint venture between the Saudi Arabian Oil Company (Saudi Aramco) and Dow*, located in Jubail Industrial City, the world’s largest industrial complex of its kind, about 100 km northwest of Dammam in the Kingdom’s Eastern Province. The Sadara chemical complex is the world’s largest to be built in a single phase. Comprised of 26 world scale manufacturing units, the Sadara complex will be the first in the Middle East to use refinery liquids, such as naphtha, as feedstock. By using best-in-class technologies to crack refinery liquid feedstock, Sadara will enable many industries that either currently do not exist in the Kingdom or only exist through imports of raw materials. Sadara is on track to deliver its first products in the second half of 2015, with the complex in full operation in 2016.


As an international chemical group, SOLVAY assists industries in finding and implementing ever more responsible and value-creating solutions. The Group is firmly committed to sustainable development and focused on innovation and operational excellence. Solvay serves diversified markets, generating 90% of its turnover in activities where it is one of the top three worldwide. The group is headquartered in Brussels, employs about 29,000 people in 55 countries and generated 12.4 billion euros in net sales in 2012. Solvay SA SOLB.BE) is listed on NYSE Euronext in Brussels and Paris (Bloomberg: SOLB.BB- Reuters: SOLBt.BR).