Solvay concludes a global profit-sharing agreement based on Group performance 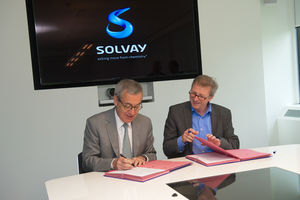 Brussels, 1 June 2015 --- Solvay has signed an agreement with its global social dialogue body – the Solvay Global Forum – on the introduction of a profit-sharing plan based on Group performance. This will allow all employees worldwide to benefit from a profit-sharing scheme indexed to the Group's financial and sustainable development performance for 2015 and 2016.

After the successful termination of a one-year pilot scheme benefiting more than 22,000 employees in 2014, Solvay has now announced this new two-year profit-sharing plan. Based on both quantitative and qualitative criteria, it is linked to the achievement of financial (80%) and sustainable development targets (20%).

“We wanted to introduce a simple value-sharing scheme benefiting everyone. This innovative approach allows us to raise the awareness of Solvay employees throughout the world, whether blue-collar or white-collar employees, to the Group's economic and societal performance and to strengthen their sense of belonging to the Group”, explained Cécile Tandeau de Marsac, Group General Manager Human Resources at Solvay. “This agreement illustrates our commitment to remunerate our employees in a fair manner, in line with Solvay Way, our sustainable development policy”.

"This global agreement is a milestone because it rewards the engagement of the Group’s employees worldwide in Solvay’s success. It also represents an important step forward in our social dialogue as it is the result of the first meetings within the Solvay Global Forum,” said Albert Kruft, coordinator of Solvay Global Forum.

An annual budget of € 10 million has been allocated to the plan for 2015. This will be distributed in line with each country's total payroll, with each employee in a particular country receiving the same amount. Plan beneficiaries are all Group employees in all 51 countries, with the exception of senior executives and French employees who already benefit from an equivalent plan.