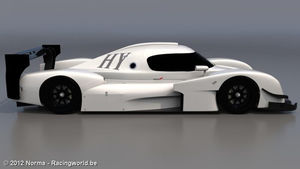 Brussels, May 18, 2015 --- Solvay is proudly taking a leadership role in the development of the Polimotor 2 all-plastic automotive engine, to be tested in a race car next year, demonstrating its unique and industry-leading advanced specialty polymer technologies in light-weighting through metal replacement.

The collaborative project will ultimately set the stage for innovative breakthroughs in future commercial automobiles. The engine typically is made of metal and the single heaviest part in a car. Polimotor 2 aims to develop an engine weighing 138 to 148 lbs (63-67 kgs), or about 90 lbs (41 kgs) less than today’s standard production engine.

Solvay is the industry leader in specialty polymers materials for the automotive industry, which is increasingly relying on its ultra-resilient materials and solutions to replace metal parts in exterior, interior and underhood applications, enabling the industry to comply with tougher fuel and emission regulations.

”The Polimotor project is yet another pioneering opportunity for Solvay Specialty Polymers to bring its innovations to the forefront and to expand its lightweighting offerings," said Augusto Di Donfrancesco, President of Solvay’s Specialty Polymers Global Business Unit. “Through this partnership we will further challenge our boundaries, showing all the more that our high performance polymers offer solutions in reducing weight, lowering fuel consumption and that they are a key contributor in diminishing CO2 emissions.”

In Polimotor 2, Solvay will replace up to ten metal engine components – including the water pump, oil pump, water inlet/outlet, throttle body, fuel rail, cam sprockets and others – with parts made from seven of its high-performing thermoplastic materials.*

The Polimotor 2, four-cylinder, double-overhead CAM engine will ultimately be installed in a Norma M-20 concept car in 2016 to compete at the racing of Lime Rock Park, Connecticut, the United States. Solvay contributed a major role toward the success of the first Polimotor engine, conceived by U.S. engineer Matti Holtzberg in the early 1980s.