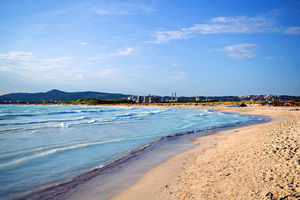 As a science company, Solvay is focused on contributing to the production of solutions and materials that benefit society and we have set high standards for our sustainable development road map, Solvay One Planet. At Solvay, we strive to exceed the standards required of us.

Solvay's Rosignano plant in Italy has been producing soda ash for over a century. Soda ash is mainly used for the production of glass and sodium bicarbonate.

The soda ash production process only uses natural material, including natural limestone from the nearby quarry of San Carlo, Livorno province. The powdery limestone remaining from the production cycle is released from Solvay's plant into the nearby sea. It is the same natural material we take in the facility; Solvay doesn’t use or add any heavy metals as part of its manufacturing process. The natural limestone contributes to the color of the white beaches as well as stabilizes the shore against erosion. This is done in compliance with local and national regulations as well as Solvay's high standards for health, safety and environmental protection.

The IPPC (Integrated Pollution Prevention and Control) permit for the Rosignano facility, which includes Solvay’s soda ash plant, was renewed by the Italian Ministry of Ecological Transition in January 2022 for the coming 12 years, confirming that Solvay’s Rosignano plant may continue to operate in compliance with EU and Italian regulatory requirements. The renewal came after an extensive three-year review of the Rosignano operations that was conducted by an independent committee of experts. In March 2022, an appeal was brought before the administrative court of Tuscany against the Ministry’s decree issuing the IPPC permit. Solvay is confident the court will uphold the granting of the permit.

Document
Solvay’s Soda Ash Production in Rosignano - Factsheet (pdf)
What is discharged in the sea at Rosignano?

The Solvay facility mainly discharges limestone residues into the sea.

Limestone is a widespread natural material, which you find even in most cliffs along the coast near Rosignano and in many coastlines around the world (such as Etretat in France).

Limestone is used as a raw material in the production of soda ash. The powdery limestone remaining from the production cycle is released by Solvay's plant into the nearby sea. It contributes to the color of the white beaches as well as stabilizes the shore against erosion. (see also question 4: benefits of releasing limestone).

The site releases other suspended solids such as gypsum, sand and clay, all natural, inert material. The release of these sands do not alter the quality of the water (see question 6. Is the water safe to bathe?).

Why is this release process used at Rosignano while other techniques are used elsewhere?

There are several acceptable techniques to dispose of inert materials remaining from soda ash operations, as outlined in the EU Commission’s Reference Document on Best Available Techniques (BAT). Those methods are: 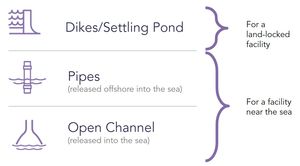 Each of the techniques is considered solely based on the facility’s specific geographical characteristics and alignment with BAT. Following discussions with authorities, and supported by independent scientific bodies, a release to the sea through an open channel was confirmed to be the preferred solution for Rosignano, given that:

The renewed IPPC permit acknowledges these facts, confirming that the direct release into the sea through an open channel is the best available technique according to BAT-BREF.

The mayor of Rosignano also confirmed that “other solutions have been evaluated and discarded such as the use of settling pounds” (see full quote).

Why is the Rosignano Solvay beach so white and its water so blue? 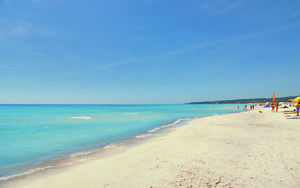 The plant uses natural limestone as a raw material from the nearby quarry in San Carlo, Livorno province. The powdery limestone remaining from the production cycle is discharged from Solvay's plant into the nearby sea. These clear limestone sands flow back to the beach and contribute to the color of the white beaches of Rosignano (spiagge bianche), while also helping prevent natural erosion (see also question 4).

The white sands also give the appearance of a clear blue color to the shallow waters.

Are there benefits to releasing limestone along the coast? 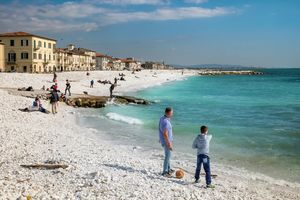 The limestone released by the Solvay facility flows back onto the shore and the beach and therefore plays an important role in stabilizing the shore against erosion. This has been acknowledged in Solvay’s renewed permit in January 2022: “the presence of suspended solids does not affect the quality assessment of this stretch of sea and, indeed, they constitute, in their coarser particle size, the quality of the features “White Beaches”, one of the few stretches of the Tuscan coast that is not affected by marine erosion” (Parere Istruttorio Conclusivo - p. 30)

Erosion is a significant problem along the Tuscan coast as confirmed by many studies amongst one from University of Pisa, which is stating that without Solvay’s limestone release of  minimum 140 tons/year, the beach would quickly disappear. In fact, many municipalities use sand dredged from the sea bottom or from quarries to maintain their beaches and protect the coast from erosion.

President of the Tuscan region Eugenio Giani said “Coastal erosion - said President Eugenio Giani - is a dynamic phenomenon and a consequence of climate change that affects large tracts of the Tuscan coast. This requires the Region to direct its activities both to the needs of seasonal restoration and to long-term planning”.

In 2019 the Tuscany Region granted an innovation award to a project called Marble Beaches) using residues from quarries of Carrara marble (which is actually limestone in a different geological form, as explained here) to replenish beaches and support coastal stabilization.

Is the Rosignano Solvay beach toxic or polluted?

No. The suspended solids conveyed from the Solvay plant into the sea are all natural, inert material. The competent authorities constantly monitor the beaches and the sand quality (example)

Is the water safe to bathe in Rosignano?

The local institutions and public authorities, ISPRA (Italian National Institute for Environmental Protection and Research) and ARPAT (Agenzia regionale per la protezione ambientale della Toscana), also regularly review sea water quality and have confirmed the environmental conditions near the facility, including the water quality, are consistent with the rest of the Tuscan coast, it is very clear in this table published by ARPAT.

The ARPAT report on the quality of bathing waters in Tuscany in 2020 rates all 17 testing points as “excellent” in the municipality of Rosignano Marittimo, including two in front of the Solvay facility.

According to Italian law for all industrial or port facilities in Italy, bathing is not permitted less than 100 meters upstream and downstream of any discharge point. In other words, this exclusion area is common and is not specific or exclusive to the operations at Rosignano. Consistent with this law, the municipality and the ARPAT also refer to a ban on the area, as a precautionary measure.

How is the Solvay facility in Rosignano regulated and monitored?

Solvay’s IPPC permit was renewed by Italian authorities for the Rosignano facility in January 2022. The new permit is based on an extensive review of the Rosignano operations conducted by an independent committee of experts, whose conclusive report contains detailed prescriptions to be complied with by the plant, and a thorough monitoring and compliance report by the Italian National Institute for Environmental Protection and Research (ISPRA).

Solvay’s Operations are monitored regularly by Scientific Bodies and Third Parties, as shown in this table:

The renewal of Solvay’s license to operate its Rosignano facility is granted also on the condition that an independent and in-depth study be carried out every two years on any potential impact of the operations on the marine environment near the plant. The most recent study was concluded in November 2020, showing no impact on water quality resulting from Solvay’s facility, which allowed for the permit to be renewed in january 2022

Does the plant discharge heavy metals as part of the process in Rosignano?

Solvay does not use or add heavy metals in its soda ash industrial process. Limestone, like many types of rock or stone, naturally contains traces of heavy metals, but those remain imprisoned in a solid state in the limestone and are not harmful for living organisms, including people and fish. 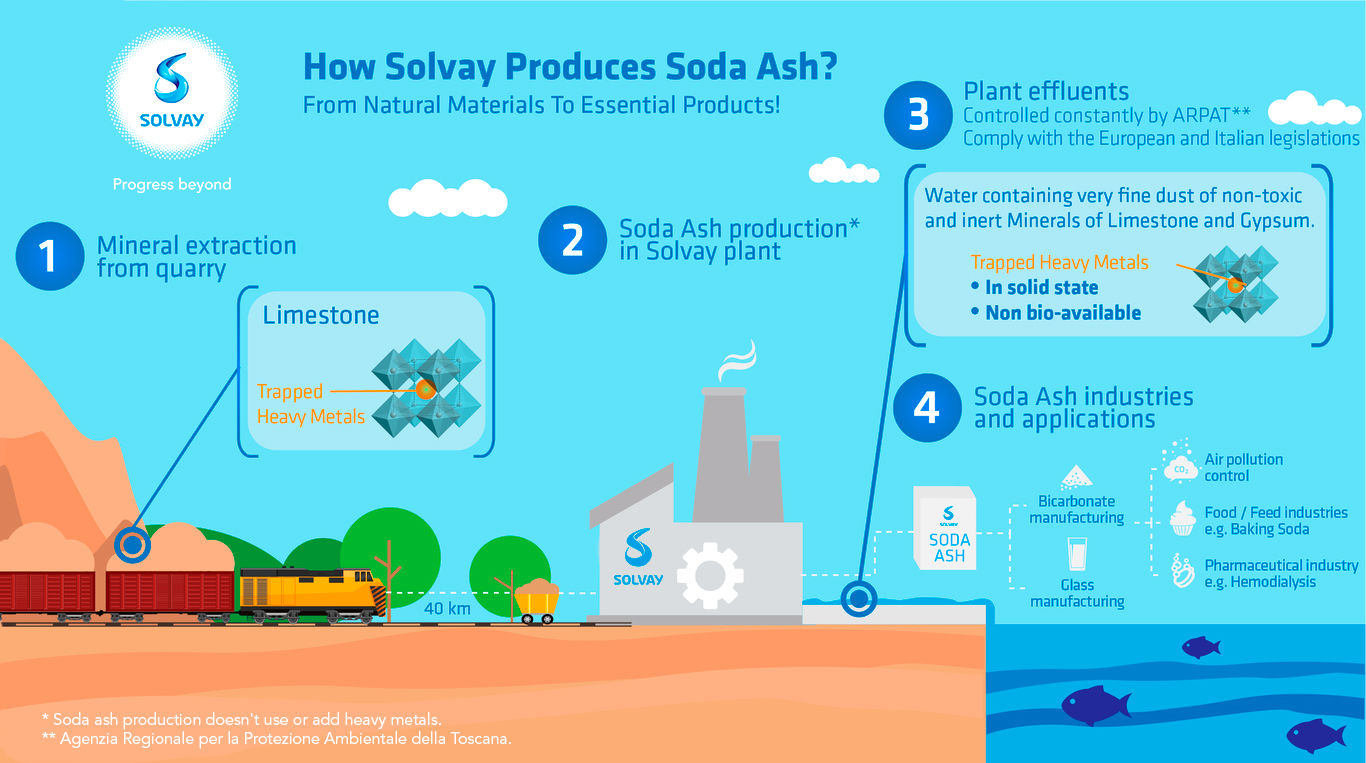 What is the history of Rosignano?

Rosignano facility is one of Solvay’s first plants. When its activities started in 1912, the area had very few inhabitants. The town near the plant is called “Rosignano Solvay” as it developed around the economic activities of the facility. Rosignano Solvay is a rare example in industrial history: a town that rose from scratch in the early 20th century around a chemical plant. Read more

Is it true that the United Nations Environmental Programme ranked Rosignano as one of the most polluted coastal sites?

The ranking of the UNEP on coastal sites dates back to 1999 and has not been updated since. It concerns a long list of 101 Mediterranean coastal hotspots. Rosignano is rating is 15.6 on a scale of t 0 to ~25). Hotspots are evaluated based on a list of 6 key issues that are not all relevant to the Rosignano site. Overall it evaluates the impact of the civil and industrial discharges regarding the quality of the local seawater, drinking water, recreational activities, the economy and social welfare.

In the latest ARPAT publication, Rosignano is classified as Excellent in terms of ecological status.

Over the past 20 years, much has changed. Solvay has invested a lot in the last two decades to improve its production processes, employing better use of natural resources such as decreased water consumption, lower energy use, reduced emissions in the air and water, and decreased waste production by improving recycling practices. 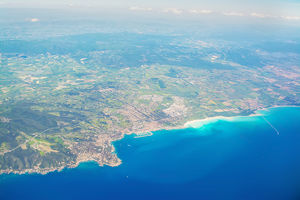 Solvay's Rosignano operations are in compliance with the law and our own high standards, including applying the EU framework for Best Available Techniques (BAT/BREF).

We work in close collaboration with local institutions to monitor the quality of the shore, water, flora and fauna.

The renewal of Solvay’s license to operate its Rosignano facility is also granted on the condition that an independent and in-depth study be carried out every two years on any potential impact of the operations on the marine environment near the plant. The most recent study was concluded in November 2020, showing no impact on water quality resulting from Solvay’s facility.

The local institutions and public authorities, including the ARPAT (Agenzia regionale per la protezione ambientale della Toscana), which supervises the plant, also regularly review sea water quality and have confirmed the environmental conditions near the facility, including the water quality, are consistent with the rest of the Tuscan coast.

Monitoring is done on a daily, bi-monthly, quarterly and annual basis:

The local institutions and public authorities, including the ARPAT (Agenzia regionale per la protezione ambientale della Toscana) have confirmed that the offshore water quality is similar to the rest of the Tuscan coast.

Multiple governmental and academic institutions conduct regular studies to assess the safety and environmental impact of Solvay's facilities in Rosignano. These include:

In line with our sustainability commitments, Solvay has made significant investments in Rosignano over the past 20 years with a focus on decreasing freshwater consumption, lowering energy use, reducing emissions, and increasing recycling.

For any question on Solvay’s Soda ash activities in Rosignano, please contact us at: rosignano.solvay@solvay.com